I wanted 2020 to be the year to learn lisp, but other things happened instead.

I've almost finished my first racket project, an email processing program. I wanted something that would move emails from my Inbox to other folders based on a rule set, but not until after I read them in the Inbox (on demand rather than on receipt). This program does that, integrating with the isync/notmuch/neomutt maildir system I've been moving toward from Thunderbird. 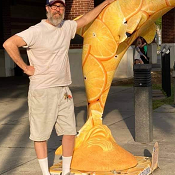 @daremo i wrote my own lisp like interpreter (fbs) for a cad program i made. wana see? My cad app is very basic in comparison to autodesk and the interpreter even more so. The syntax for fbs (freeBASIC script) is similar to freeBASIC's syntax.

@owen Sure, I'd like to take a look. I'm interested in language design, too, having made my own very simple extensions to C. I haven't made a lisp interpreter yet, but I'm sure I will down the road. I really like programming in racket so far.

@daremo my code is @ fbcadcam dot com. been years since i played with it. i think i made a demo video showing how to use my LISP like interpreter if i can find the vid maybe i'll make another. my gui uses gtk so the download is kinda bloated. ps havent' heard of racket yet. i'll check it out.

@owen Cool project and web site! That looks like a lot of work. Do you have users, or did you do this only to learn FreeBASIC? Don't think I've heard of FreeBASIC before, btw. That's great that it runs QB programs.

@daremo i started writing it in 2007 worked on over the next few years. later shared it with family and friends in the pi here's a link to a quick demo of the interpreter https://youtu.be/sl7pgYOGZ54

@daremo LOL i was happy with QB45 then found freeBASIC. thought i would enjoy reverting back to QB64...